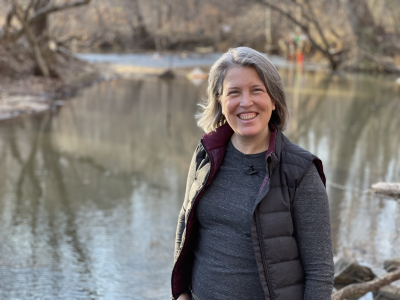 Professor Emily Bernhardt has repeatedly been named one of the most influential ecologists in the world.

Emily Bernhardt, James B. Duke Distinguished Professor and chair of Biology, was elected as an American Geophysical Union (AGU) Fellow.

AGU, a nonprofit organization that supports 130,000 enthusiasts to experts worldwide in Earth and space sciences, annually recognizes a select number of individuals as part of its honors and recognition program. Since 1962, the AGU Union Fellows Committee has selected less than 0.1% of members as new fellows.

Bernhardt, who is also a professor at the Nicholas School of the Environment, is an ecologist and a biogeochemist. Her research looks at the impact of land use and climate change on the structure and function of watershed and freshwater ecosystems. Current work in Bernhardt’s lab includes research on the long-term impacts of a changing climate on rivers across the continent, the consequences of rising sea levels and salinization on coastal wetlands and the impacts of mountaintop-removal coal-mining on the chemistry and biodiversity of Appalachian rivers.

Her outstanding collaborations to ecology have previously been recognized by the Ecological Society of America, the Society for Freshwater Science and the Alexander von Humboldt Foundation, among others. Bernhardt’s academic papers have also ranked in the top 1% by citations for the field of ecology and environmental sciences in both 2020 and 2021. At Duke, she is the co-organizer of the course Let’s Talk About Climate Change.

“I am really honored to have been named a fellow of the American Geophysical Union and to find myself listed alongside several key mentors and senior colleagues who have helped shape the way I think about both life on Earth and life in general,” Bernhardt said.

“Emily makes a fantastic AGU Fellow for her work illuminating basic biogeoscientific processes and for doggedly pursuing the biogeochemistry of aquatic contaminants around the world,” said Robert Jackson, professor of Earth system science at Stanford University and Bernhardt’s nominator.

Bernhardt joined 53 other individuals in the 2022 class of AGU Fellows. In addition to her outstanding achievements and contributions to science, she was also selected for embodying AGU’s vision of a thriving, sustainable and equitable future powered by discovery, innovation and action.

AGU fellows are also selected based on their professional conduct, and by interacting with students and colleagues with integrity, respect and collaboration while creating deep engagement in education, diversity and outreach.