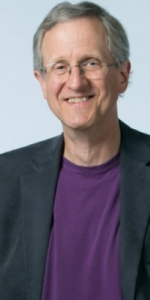 In this episode of BioGist, Christina Shin, a Duke student who recently graduated in the class of 2021 with a major in Art History and minor in Chemistry, interviews Dr. Steve Nowicki, Professor in the Biology department at Duke University. Dr. Nowicki shares how he researches animal communication on the marsh and the lab bench, and what bird song tells us about animal behavior.

Listen to hear more about how his music major as an undergraduate led to his career in biology and how he and his wife, Susan Peters (who is also an incredible scientist), love to cook!

To find out more about Dr. Nowicki, visit his lab’s website at http://www.nowickilab.org/.

Welcome to BioGist, where we bring you the gist of biology at Duke University. I'm Christina, a senior at Duke. And today, I'm here with Dr. Steve Nowicki. Dr. Nowicki, thank you so much for joining me.

Pleasure to meet you.

So to get started, what do you study?

Broadly speaking, I study how animals communicate. I'm interested in communication of all sorts of animals, but most of the work that we've done uses birds as experimental subjects. So then that leads to the question, What do animals have to talk about? They're not reciting Shakespeare, they're not reciting the poetry of Lhasa, they're talking about some very basic things, for example, finding a mate or defending a territory, or finding food or feeding their young, really elemental things that animals need to do to survive and be successful. The question is, how is it that they're able to do even those elemental things? You know, what is information in an animal signal? What makes that information reliable, or what we would say honest? How can a signaling system evolve? Those are the kinds of questions we ask.

I'm a little bit curious about why birds.

One reason is that birds more or less communicate using channels that we humans are aware of, and familiar with. They use sights and sounds, birds are colorful, they use color signals, and they make sounds, we can hear birds, we can see birds, and so it's easy to connect. Now there's an important caveat there, which is that birds don't actually see the way we do exactly. They don't see color the same way we do. They don't hear it the same way we do. So we have to be cautious to make sure when we're studying those signals, that we're studying them in the birds' own perceptual space. But there's another interesting thing about birdsong in particular, which is that young songbirds, that's a suborder of birds, but it's several thousand species of birds that need to learn their songs when they're young, from adults that they hear. And that is very similar to the way we humans learn to speak.

That's incredible. So what is the primary reason you got into studying evolutionary behavior of birds?

I was a music major when I was an undergraduate, I found biology late in my undergraduate career. I barely finished a biology major, but decided I wanted to go to graduate school in biology. And I went to graduate school with a very open mind about what I might study, but mostly interested in how organisms work, animals and plants, how they survive out in the world. And by chance in my first year of graduate school, I did a project for a course on birdsong. And it worked. The connection was that my interest in music sort of drew me to the aesthetics of birdsong. Not all birds sound beautiful, some, like the yellow headed Blackbird have been described as like a rusty gate opening when they sing. But by and large, you know, we find birdsong to be aesthetically attractive. So I must admit that that's part of what brought me in, is that it's just really enjoyable.

That's amazing. So I wanted to go back to the question of why you study birds to ask how you study birds? What would you say is the bread and butter of your work?

That's a very good question. We take a very integrative approach to this. On one end, we're interested in the evolution and ecology of how animals are using signals. And that takes us for example, out into the field, with binoculars, tape recorders, various kinds of audio or video equipment. On the other hand, we're interested in how the animal's brains are actually processing and producing those signals. And that might take us into the lab with electrodes and lab coats and, and everything in between. Because to study a problem in biology like this, a problem in organismal biology, you often have to take this multifarious approach where you're approaching the question from a lot of different angles in order to piece together a comprehensive answer. I would say the bread and butter of our work is to carefully observe animals. And then based on those observations, designing experiments to ask them questions about, for example, how they hear a sound, or what a sound means to them, or what a visual signal means to them. You're basically doing what I would like to call a bioassay. You have a question, you have a hypothesis, you, for example, suggest that female birds of a species are more attracted to males songs that are more complicated, more complex. So how do you ask that question, and that's where you might, for example, bring those females into the laboratory and train them to hop on perches that will trigger the playback of sound and find that they will hop on the perch that plays back the more complicated sound. That doesn't prove that the female is going to choose that male in the field but it's an example of sort of getting you somewhere there. The bread and butter is almost like going out and doing Nature Channel stuff. With all of the fun stuff that comes with it, going out and a beautiful day and with the birds singing, and you're in the middle of this gorgeous outdoor space, and then with all the challenges, so you're now you know, a half hour walk away from any dry space, you're a middle of the marsh and the thunderstorm comes up. Yeah, a little scary, or you make a misstep, and you find that you've gone face down with a faceplant into the mud of the marsh. At the end of the day, it's actually a lot of fun. But there are some days when it's not quite as fun.

That was a perfect mental image of National Geographic, which I watched while I was growing up. So we talked a lot about your work in the lab and on the field, what is one thing you enjoy doing outside of work?

My wife and I spent an inordinate amount of time cooking, we both really like to cook, I'd have to say we're both pretty good cooks, we cook a lot of different kinds of food, we specialize on different things. And we actually love having people come over and cook with us, I always have my class over for dinner. The pandemic has ended that for a few semesters, but you know, it's a good way for students to know each other and to get to know me and my wife. So I would say that maybe cooking is our biggest hobby.

Oh, this is making me hungry. Is there anything you wish someone who isn't a trained scientist understood about your profession or discipline?

Yeah, I mean, I'll say one other thing. And I want to give credit to Matthew Zipple, a graduate student who I've worked with closely and articulated as well as anybody I've heard an answer to the question of "why would you study animal behavior?" Because there are people who like nature, who like animals and who are just intrigued with it, but then there are other people who say, "Why Why spend your time you know, you're a talented person, why study this?" And it has to do with asking how exceptional are humans? Right? I mean, we are exceptional. But are we exceptional in unique ways? Are we just exceptional? Because we're doing the same things, we're just doing a lot more of it. So as we study animals, for example, how they communicate, you know, some would say, what could you possibly learn about human language from studying a bird singing? And the answer is a surprising amount about what is and isn't special about human behavior, human language, right? are we different in kind? Or are we different in degree? And I think we're different in degree. And it's an interesting question that we can, you know, pose to and learn from animals to say, how different are we in degree, and if all we're interested in is in the human condition, we can still gain a better perspective on that condition, by sort of seeing ourselves through the lens of what animals can and can't do.

Thank you so much for joining me, Dr. Nowicki. And thanks to the listener for joining us at BioGist. Also thank you to the Duke University biology department for supporting this podcast and Poddington Bear for the music. See you next time.