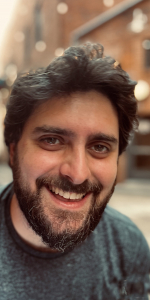 In this episode of BioGist, Emily Nagamoto, a member of the class of 2024 majoring in Earth and Climate Sciences, interviews Dr. Jean Philippe Gibert, an assistant professor in the Biology department at Duke University.

Listen to hear Dr. Gibert describe food webs, why protists are cooler than lions, and how to create a mathematical model.

Welcome to BioGist, where we bring you the gist of biology at Duke University. I'm Emily Nakamoto, a freshman at Duke, and I'm here with Dr. Jean Philippe Gibert, an Assistant Professor of biology at Duke. Dr. Gibert, thank you so much for being with me today.

Thank you so much for having me, Emily.

So let's get right into it. What do you study?

So we study how changes in environmental conditions are influenced the way organisms interact with one another. What I mean by that: is organisms tend to influence each other in multiple ways. So for example, lions eat wildebeest, ticks bite deer, but also ourselves, mosquitoes are the same. We call that ecological interactions. So I study one type of ecological interaction, which is predator-prey interactions, like that between lions and zebras and wildebeest. And I study in particular how those interactions may change over time as the climate gets warmer.

So why do you study that? How did you get into this field?

You know, in a sense, I just took a number of unexpected turns, because I found them interesting as they were coming in. When I was a freshman, I was actually interested in studying dinosaurs, and I wanted to become a paleontologist. But when I entered college, I realized that there was all this world that to me came as a surprise, right? I mean, I was exposed to physics and math in ways that I had not been so far, and quickly I understood that I wanted to have a component of those areas of science in my work, but I just didn't know exactly how to go about doing that. So I did protein biomechanics, and biophysics, I joined a physicist lab to study the dynamics of these networks of species and their feeding interactions, which we call food webs. And it actually did join a paleontology lab, but I quickly realized that I wasn't necessarily all that good at recognizing bits of bones, right. And so that collection of seemingly disparate things, kind of organically led these interesting dynamics of these networks of species and their feeding interactions, and by the time I was midway through my PhD, it was pretty obvious that there's something going on with the planet. And without understanding how these dynamics occurred in the context of these future climates, then I felt that there was something missing to what I was doing. And so that's when that component of changes in environmental conditions kicked in. So so what I do is I say that, but from a combination of math and lab based experiments using these freshwater organisms, unicellular organisms called protists, which play an important role in climate change. And sometimes I find myself looking back and being like, wait a second, I wanted to study dinosaurs! Where, where did I go wrong, but then I quickly realized that I didn't go wrong, I just took a series of paths that I found exciting, and that led to something that I enjoy.

Awesome. So you kind of mentioned that you do, you know, computational analysis, but how would do study what you study?

We try to find the right tool for the work we need to do. You know, sometimes you need a hammer, sometimes you need a sledgehammer, sometimes you need a screwdriver, right? So sometimes the questions we're posing, need to be addressed using math. And that's, that's still a strong, very strong component of my lab. But the lab has been kind of organically morphing into something that has a stronger empirical component. You can't actually poke the microbe with a probe. But if you're lucky, you can look at them under the scope. That's the case with protists. But for other organisms, like bacteria and viruses, you need to use molecular tools, right? And so we're using a collection of methods, including genomics, meta genomics, meta transcriptomics. So methods that allow us to tell not only which organisms are there, what genes are there, and what function they play. And we pair that with like, kind of classic approaches of going to the field and collecting samples, bringing them to the lab, imaging, counting, right, and the whole is kind of on a basis of mathematical framework, right?

You know, maybe this is just my very rudimentary knowledge of food webs. But as you're explaining before, you know, I think food webs I think like lions and wildebeest, so, you no big animals. How did you arrive at protists?

It's actually really hard to study lions, right? You need to go to Serengeti, and to follow these lions around, their densities are incredibly low, because they're a top predator, you need permits. So there's many things you cannot actually do with big predators in the field. But protists have actually, they have a surprisingly long history of being used as a model system in ecology. And so as a mathematician, one of the things I felt was lacking was that connection to real data. And so immediately, I saw that as an opportunity to become a better rounded ecologist, but also an ecologist whose science could have an impact that's broader than at first I thought it could have. I realized that by biomass, right, protists are just incredibly abundant. There's plants, bacteria, and then it's protists. So we actually play a massive role worldwide as the most important consumers of the second most abundant organism on Earth, bacteria, which also happens to be one of the most important ones, together with plants, in deciding the fate of carbon in the atmosphere. So all of a sudden predation by protists have pretty important consequences on climate, which is something I would have never imagined, right, when I started going down this path.

I'm going to shift gears a little bit. So when you're creating a mathematical model, what are the type of things that you need to think about? Or that the big questions that you're asking?

There's two things that are important to understand about a model. The first thing is, in the words of British statistician George Box, "All models are wrong, but some are useful". And the second one is that mathematical modeling in particular, is just a different thing, which that allows you to put down in a different way the things that you say with words, right. So for example, let's say I'm saying, well, predators decrease the abundance of their prey. And so I can say that in words, right, can say the same thing mathematically using an equation. And so the things that you take into account are the biology of a system and what it is that you want to understand, right. So the more that you use that type of modeling, but also the the building blocks of your model, which is what we call assumptions depend on the questions asked the system and the biology of the system.

Awesome. My last question is kind of more fun. What's one thing that you love doing outside of work?

There's many things I love doing outside of work. I love playing sports, which isn't something that I get to do a ton lately. I was a soccer player for many, many, many years, I started very young, and I stopped playing seriously when I was 23 or four, you know. I have a little kind of goal in my basement and it just go there and shoot the ball. I play video games. You know, I'm a millennial, so I grew up playing video games, and I still do. And then finally hilarious when my colleagues are like "What, you play video games?", like of course I play video games, what are you talking aboutAnd I love actually bringing people home and getting to play board games, I'm a pretty big DND fan. So a number of things, all of which it can include a ball, a video game or a board game, then all the better.

Well, thank you so much for meeting with me and talking with me. This has been a pleasure. Thank you for listening. And thank you to the Duke biology department for supporting this podcast, as well as Poddington Bear for the music. See you next time.