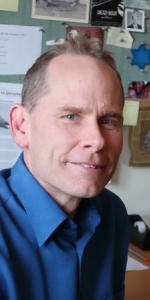 In this episode of BioGist, Benjamin Asomani, a member of the class of 2024 majoring in Computer Science and Biology, interviews Dr. David Sherwood, Professor in the Biology department at Duke University. Listen to hear Dr. Sherwood describe how cells interact with the extracellular matrix, and how a nematode can give us precious insights into cancer treatment.

Welcome to BioGist, where we bring you the gist of biology at Duke University. I'm Benjamin, a freshman at Duke. And today I'm here with Dr. Sherwood. Morning, professor, nice to meet you.

Very nice to meet you as well.

Could you kind of give a little overview of of what you specifically do?

So I'm really fascinated by how cells interact with the extracellular matrix. When we think of animals, you know, we think of a bag of cells, the neurons, muscles, intestinal skin, in yet half of our mass is made up of the stuff cells secrete that surrounds them, called the extracellular matrix: bone, interstitial matrix, enamel for our teeth. And so what I'm interested in is most ancient extracellular matrix, which is called a basement membrane and underlies or surrounds all tissues, and somehow cells have to organize it, you know, inside of the cell. We know a lot about how cells control processes. Well, how do you control something that's outside of the cell? And so it turns out that as we age, a lot of these matrices go wrong, they build up, they have the wrong components in them. And we'd like to understand that both because it's really fascinating to me, and also, because it's really important for a lot of human diseases.

And for my understanding, you do a lot of work surrounding cancer.

I do. So all tissues are encased by this ancient extracellular matrix, this basement membrane, and it's like a sheet of Kevlar, it is incredibly dense, it bears the load of most tissues. So it plays a key mechanical role in supporting tissues. And the defining step of metastasis - and metastasis is where tumor cells spread from their origin, and leave that origin tissue and enter into the interstitial space between tissues, enter into the vasculature to spread to other tissues- the defining step is breaching through that basement membrane through that, you know, sheet of Kevlar. And so that turns out to be something that cells normally do in development, because tissues have to connect together, cells have to disperse and what tumor cells are doing is they're hijacking a developmental program that many cells use to do the normal migration. So we're very interested in understanding that so that we can block it. And really the surprising thing is there's not a single cancer therapy that specifically targets metastasis, and yet it's the most lethal aspect of cancer. Yeah, it's our I think, yeah, our ignorance on important things is quite stunning.

So then, I, I cannot pronounce the name of this creature. But what is it? What is this?

I'll pronounce it for you, we'll do it together: But it's C-nor-hab-dieties,  Caenorhabditis, perfect. And then elegance, elegance. And the elegance is, if you ever watch them, they're elegant, the way that they move. And so it's as I were elegant,

I love C. elegans. So they, they're, they were picked, they've actually been studied for over 100 years. It's just the animal has only 2000 total cells, where we have estimates of around 40 trillion cells, and yet they have nervous tissue, gut, muscle, skin and all the tissues that we have, and they're much easier to study. They're hermaphrodites, which sounds a little scary [laughs], but it's really cool in that they make their own sperm and then they store it. And it's basically a female that in an earlier stage in development makes its own sperm so it can self fertilize. And that's so great for genetics. They're optically clear, so you can see every single cell, their lifespan is only two weeks so that and the time from embryo to reproductive adult is only two and a half days, so that we can do experiments so quick. They're easy to rear in the lab, they're very easy to make transgenic. So this new, huge thing that's transformed all of biology CRISPR/Cas9 genome editing, very accessible. And so now we're going in and tagging many different proteins endogenously with genetically encoded Flora fours. So we can actually see where endogenous proteins go, their dynamics. And so in terms of this basement membrane, we're figuring out properties of it that people couldn't even imagine, right, how it turns over, how it's secreted, we're finding many of the components flow within this thin plane. And this might be a way that tissues talk to one another. So if I want to send a signal to a tissue that's miles away, cellularly, I secrete a cue, and it goes in this highway of the basement membrane and travels to that tissue. So Oh, it's so fun. It is so fun. [laughs]

And I had a talk with another, you know, Professor of Biology, and I was just kind of astonished by how, just how available CRISPR and cas9, you know, technology is to, you know, biologists everywhere. So what, what kinds of genetic changes do you guys prefer to?

Sure, I think, that's a great question. So you can do a lot of things. So let's say that you have a human disease, and you know, that it causes a mutation in a particular, you know, domain of the, that encodes a particular domain of the protein, you can now recapitulate that mutation, exactly, in C. elegans, and see, hey, what does that do to the protein? Does it affect it? Oh, localization, does it affect? Who it binds to? Does it affect its stability? Right, you can also just use it to knock out a protein, right? So you can create deletions in the gene so that the protein is no longer made just as a very elegant way to knock out a proteins function. So you can see, when is it expressed? Where is that protein present? Right? And what does that protein do in the cell? You know, what are its dynamics? Where does it go at particular times? And that may sound very kind of simple, but it's really powerful. And now by working on this, you know, simple C. elegans critter, we get new ideas about how we can target metastasis.

And what's something interesting or meaningful that you've learned outside of your research?

Ben, when I first came to Duke, it was really fun, Craig Mello was going to visit and he's a C. elegans researcher. And I had met him at a meeting, I didn't know him well. And I'm like, great, I'll meet with Craig. And then the week that he was coming to Duke, it was announced he was going to get the Nobel Prize. During his talk, he said something and you'll find this in your life as well, where there are just a few comments that people will make that are really kind of deep life lessons. And what he said at the beginning of the talk in his talk, I've taken with me and think about often is that we constantly underestimate the complexity of biology, right, the complexity of mechanisms that are out there, as multicellular animals, we've been here for a billion years, you know, 700 million, at least, the life on this planet has been here, almost from the beginning of the planet, you know, in the neighborhood of 3.5 to 4.5 billion years, that is a heck of a lot of time to build complexity. And that is kind of it for me, it's a very spiritual journey, to have the two things about this crew to have the chance to explore and figure out new things. And in parallel with that, to have the chance to work with young folks like you, like people in my class, people in my lab, that's also very spiritual. And so like, it's just, it's a, it's a awesome, awesome career. So you should think about being a boring professor, too.

Maybe? Well, I realize it's, you know, time for the end of this interview. Thank you, Dr. Sherwood.

Ben, it was my pleasure. And I hope to see you in my cell biology class.

I hope I do. So I really look forward to our paths crossing again soon. Thank you.

Thanks for joining us for BioGist. Also, thank you to the Duke University biology department for supporting this podcast, and Poddington Bear for the music. See you next time.