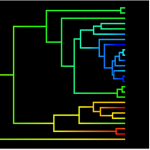 Pressures of development, particularly in tropical countries, are causing an alarming increase in the rate of species extinction, making the current resurgence in systematics especially timely. Given the reasonable estimate that systematists have only discovered and named perhaps 10% of the species on earth, and the fact that only a tiny fraction of those species have been studied in any detail, there is much work to be done in a short time. Many species will go extinct before we even know them; it is no wonder that systematists feel as though they are watching a huge, diverse library burn down before a card catalog has been prepared (or before anyone has read even 1% of the books!). Newly developed methods for data gathering and analysis of phylogenetic relationships position us on the threshold of a deep understanding of the history of the biological world. Loss of biological diversity is thus a disaster, both from an economic standpoint (How many organisms useful for food, medicine, or technology will go extinct?) and from a broader intellectual standpoint (How did the diversity of species come to be the way it is?).