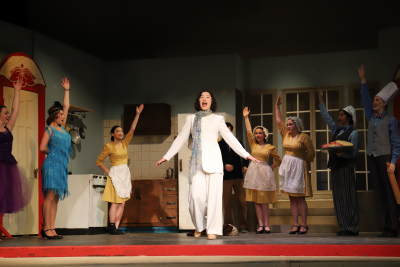 Traditionally, the arts and sciences have been viewed as two distinct fields of study, disconnected and distant to each other. But it isn’t uncommon to see Duke students with defined paths in STEM fields (science, technology, engineering and mathematics) also majoring or minoring in the performing and visual arts — adding these disciplines to not only their course loads but also their career goals.

Junior Emily Miller is majoring in Biology with double minors in Theater Studies and Chinese — and can’t remember a point in her life when she wasn’t fascinated by the sciences.

Her specific passion for biology began in middle school, when a science teacher’s enthusiasm for chemistry sparked Emily’s scientific interest. A year later, she dissected a cow’s heart in her eighth-grade biology class, and that hands-on experience was all it took to kick start her career path in the sciences.

“I found it so fascinating that we could remove a vital organ from an animal and study it in such detail, and I became entrenched in the field from that point on,” she explains.

Her passion carried through to high school, when she interned at the Reiter Lab at the University of California San Francisco her junior year, researching the effects of primary cilia on lung development in mice.

At Duke, she’s leaning more toward medical research and has been working in the Pirozzi Lab in the Preston Robert Tisch Brain Tumor Center. Last semester, she performed an independent research study looking into the effects of an antitumor drug on different stages of brain cancer.

But along with her passion for science, theater has also occupied a major part of her life. When not in the lab, Emily could be found on the stage. In middle school, she performed in every school show, and her dedication to the discipline continued through high school.

“I loved delving into the characters and understanding their motivations and desires,” she explains.

“My theater experience let me express myself creatively, and I found some of my closest friends and built great friendships.”

At Duke, she hasn’t had much time to be involved in extracurricular acting, but she’s been taking theater classes as a way to sharpen her skills and general knowledge. She’s also part of the student a capella group Lady Blue, which affords her the chance to continue performing.

We asked Emily about why she takes theater courses and what she plans to do after graduation.

Why is it important to include theater courses in your studies when your career path is focused on medical research?

I’m a big proponent of a balanced academic life. Because I spend so much time focusing on my STEM studies, I think it’s extremely important to balance that out with humanities and arts courses.

Biology and theater might seem like completely different fields, but I think combining the two is important to being a well-rounded person. Science can quickly become isolating when I’m focusing on research, so taking theater classes gives me space to express myself artistically and to reconnect with others around me.

Even though my plans are to pursue science as a career, I don't think I could live without theater and performance in some form because it brings me so much joy and is a great way to build a supportive community.

My theater courses have definitely helped me think analytically and creatively, and this creativity has helped me to approach issues in STEM with a more open mind. People don't often think of STEM as a creative field, but when I’m working on my research, I need that creativity to discover new solutions.

And I firmly believe that theater studies can increase empathy and compassion toward others. This is especially important for medical research because although we’re focusing on science, at the end of the day, we are trying to help real people — and it's so important to always keep that in mind and maintain that human connection.

What are your plans after graduation?

I want to become a researcher. Although I don’t know the specifics yet, I do know that I want to do medical research of some sort. Because my current lab focuses on brain cancer, that’s the direction I’ve been seriously considering. But for now, I think I’ll take a gap year before my Ph.D. and gain some experience working in the biomedical industry.