Human migrations over many centuries have resulted in considerable movements of organisms beyond their natural ranges. Study of these exotic introductions can help us to understand their ecology and biology as well as provide clues for the management of biological invasions. Suillus luteus is one of the most abundant globally introduced symbiotic fungi associated with exotic pine afforestation. I studied the population genomics of native and introduced populations of this ectomycorrhizal fungus to understand its evolution and genetics. Whole genomes of 274 S. luteus strains along with strains of closely related sister species were sequenced using the Illumina sequencing platform. These strains represent native populations of S. luteus from its native range across Europe and Asia as well as from five introduced populations in North America, South America, Australia, New Zealand, and Africa. Taking advantage of this rich dataset, I analyzed and compared the genetic relationships, population genetic parameters, and signatures of selection across populations to understand the natural history of S. luteus, the processes of its introductions, and the evolutionary consequences in the introduced populations.

The genomics approach used to study the mating type loci of S. luteus was applied to genomes of other Suillus and Rhizopogon species to better understand the evolution of the self-incompatibility system in suilloid fungi. I employed a novel method of de novo assembly to assemble the highly divergent self-incompatibility loci and then recovered haplotypes from the genomes. Strong patterns of trans-specific polymorphisms and high sequence divergence in the HD MAT locus suggest that this locus is under strong balancing selection and confirm that this locus functions to control mating types in suilloid fungi. Phylogenetic analyses of HD MAT haplotypes showed that HD MAT loci were multiallelic and that the origins of some mating types predated the split between Rhizopogon and Suillus.

Population genomics of native and introduced populations provides new insight into the evolution of S. luteus, the process and consequences of introduction, and evolution associated with global exotic introductions. This study also demonstrates how the genomics and theories of molecular evolution can be used to study the evolution and genetics of fungi albeit the difficulty in ecological survey and limited genetic methods in ectomycorrhizal fungi. 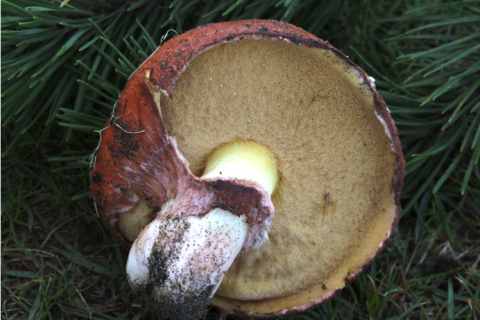